Hello Planet Coaster fans! It has been a long time since my last Coaster Addict post, but I’ve been busy with other projects. Today I wanted to share an early look at two rides I’ve been working on using the Adventure pack. Originally I started this project with just the mine train coaster, but then wanted to have it cross paths with a more gentle water coaster. So, without further adieu, here’s a look at the ride layouts and the park as it stands currently.

The mine train coaster traverses most of the park’s adventure-themed area, and actually bunny hops over the entrance. Eventually, the point where it crosses with the water coaster will be a volcano, but that’s for next time. Most of this post focuses on the water coaster as it is the farthest along.

When I started this coaster, I was going for a cheesy dark-ride feel, but then quickly got lost in decorating. Where I’ve landed is somewhere between Disney and Cedar Fair. The shot featured above is where guests first enter the show building after boarding the boats. The ride begins as a lazy ride through the jungle, but then transitions to the crocodile lagoon.

Not pictured here are several jumping crocodiles that terrorize guests. I also plan on putting a few waterfalls to hide the matte walls of the show building.

After encountering “Bertha”, a massive crocodile that has just sunk a ship, guests float into a foreboding temple filled with spikes, snakes, and all manner of traps.

Most of these traps are triggered to add a little jump factor. The roof of the temple will likely stay open to just be covered by black matte roofing. It fits with the halfway-to-Disney theme in my opinion. 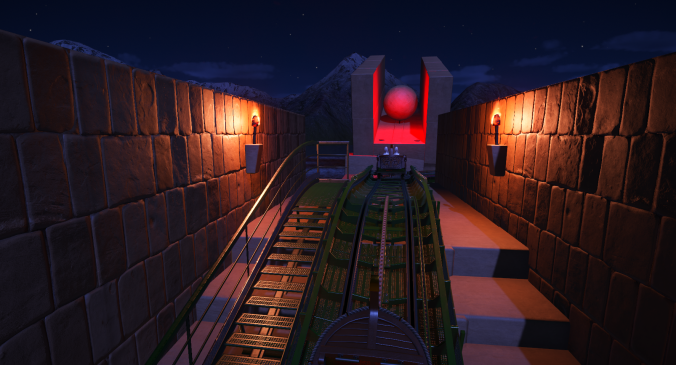 At the end of the temple, guests will encounter my best attempt at an Indiana Jones boulder scare. I’ve thrown strobes on it to add a sense of urgency, and on-ride it actually came out well. This was the last section I finished this morning, but next it’s on to creating the volcano where the two coasters will cross, and adding some of the other terrain for the mine-cart coaster.

But, here’s a sneak peak at some of the mine coaster themeing. Looking forward to sharing more soon!

Want to see other coaster addict projects? Here’s a link to some of my past galleries as well as my Steam Workshop.

Back to the Future Coaster – [Ride Through]